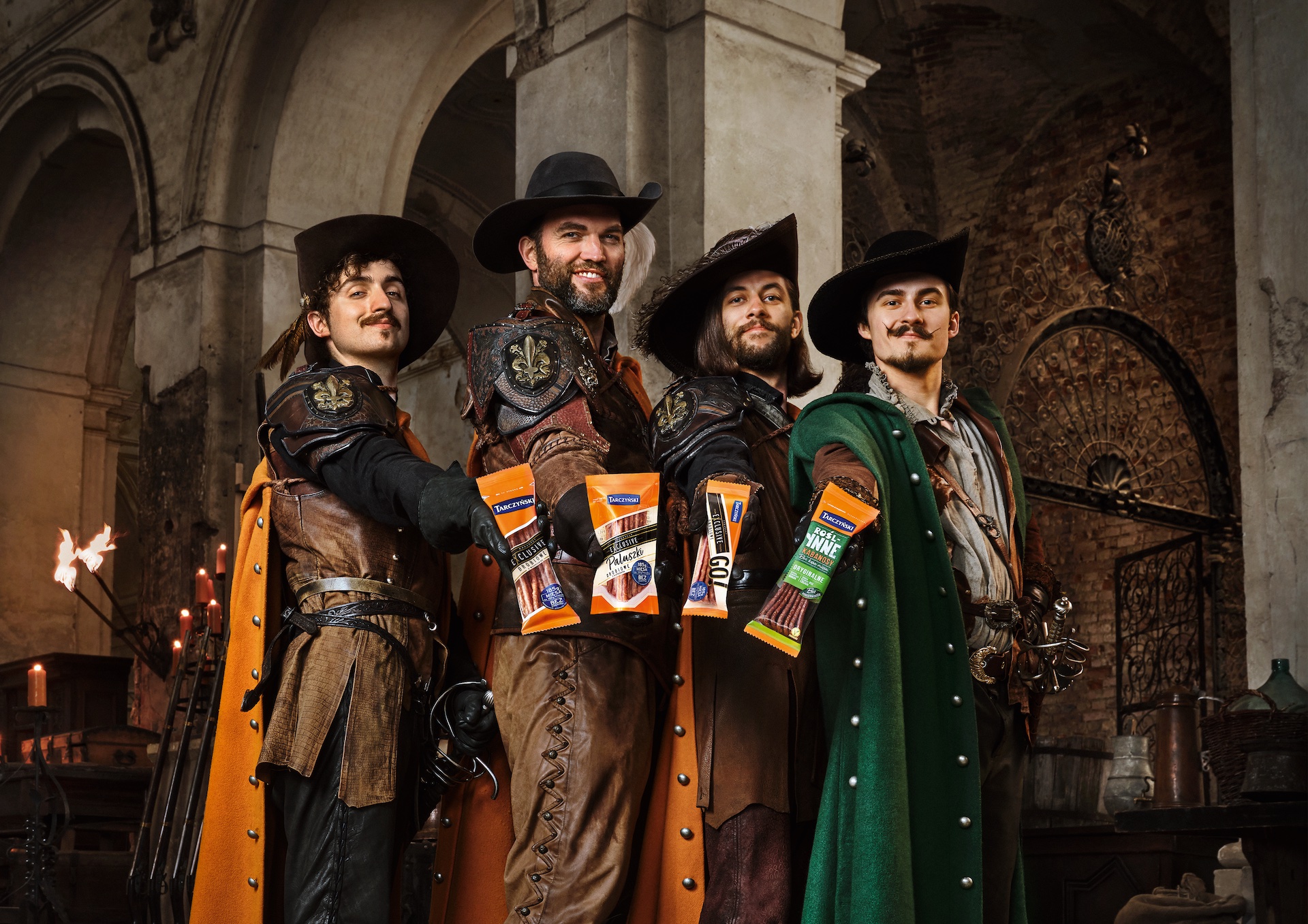 11 June 2021
Tarczyński astounds with its original ad in the brand’s new campaign!

Tarczyński has once again set out with a powerful nationwide advertising campaign. The latest advert from the leaders in the kabanos category, created in a spectacular cinematic style, will be broadcast on all the major TV stations during, for example, the main matches of the football championships which are getting under way. The campaign also uses digital channels and cinema chains.

Original communication in the food industry

Colourful and humorous adverts have become the brand’s speciality. The latest production alludes to the international motif which we know from previous Tarczyński advertisements. In the earlier ads, the Polish manufacturer’s snacks met with the appreciation of British, German and Japanese admirers. This time the heroes are French musketeers!

“This is one of the greatest and most spectacular campaigns. We estimate that at least 80% of adult Poles will see this ad at least once, and half of them will see it several times, mostly online. This short and humorous production realises our most important aims – strengthening the position of leader in the kabanos category and establishing the image of the brand offering snacks for everyone, that you can pick up at any time of day. I’m convinced that the advert will receive a very warm welcome from consumers,” says Tomasz Tarczyński, Member of the Management Board and Marketing and Export Director at Tarczyński S.A.

As the company’s representatives state, this time one of the main aims of the latest campaign is to communicate the variety of choice, under the slogan “All for kabanos, and snacks for all”. As well as meat kabanos, the ad also includes the innovative version “Without a single bite of meat” from the new vegetarian Rośl-Inne line. This decision was dictated by research and observation of the market – the manufacturer’s reports indicate that 41% of Poles now declare a desire to limit their meat consumption.

“As the unchallenged leader in the kabanos category with a 65% market share, we are consistently investing in expanding it – not only by extending the offer to include innovative products in convenient packaging, but also creating new opportunities for consumption. I can also proudly say that we have been noting double-digit growth for a long time now. These results show that Poles appreciate our efforts and are increasingly reaching for the Tarczyński brand’s varied products, choosing these as an alternative to classic savoury snacks,” summarises Tomasz Tarczyński.

A further reinforcement of the brand image and recognition

In its latest campaign, the company is once again focussing on building up recognition and a wide reach, as attested by the choice of media for its message. The most important communication tool remains television, and the clip will be shown during the most important broadcasts of the football tournament – the opening match, the final and all the games in Poland’s group. We will also see the kabanos-eating musketeers in digital media and on cinema screens, which have been enjoying increasing popularity since they reopened.

The summer campaign begins on 11 June. The advertising actions will be accompanied as always by an increased display of Tarczyński products in bricks-and-mortar shops and sales points.

The advert has been produced by Papaya Films based on work prepared by the Red8 agency. It was directed by Piotr Janowski, and the camera operator was Michał Englert.

The ad can be seen on the brand’s YouTube channel.