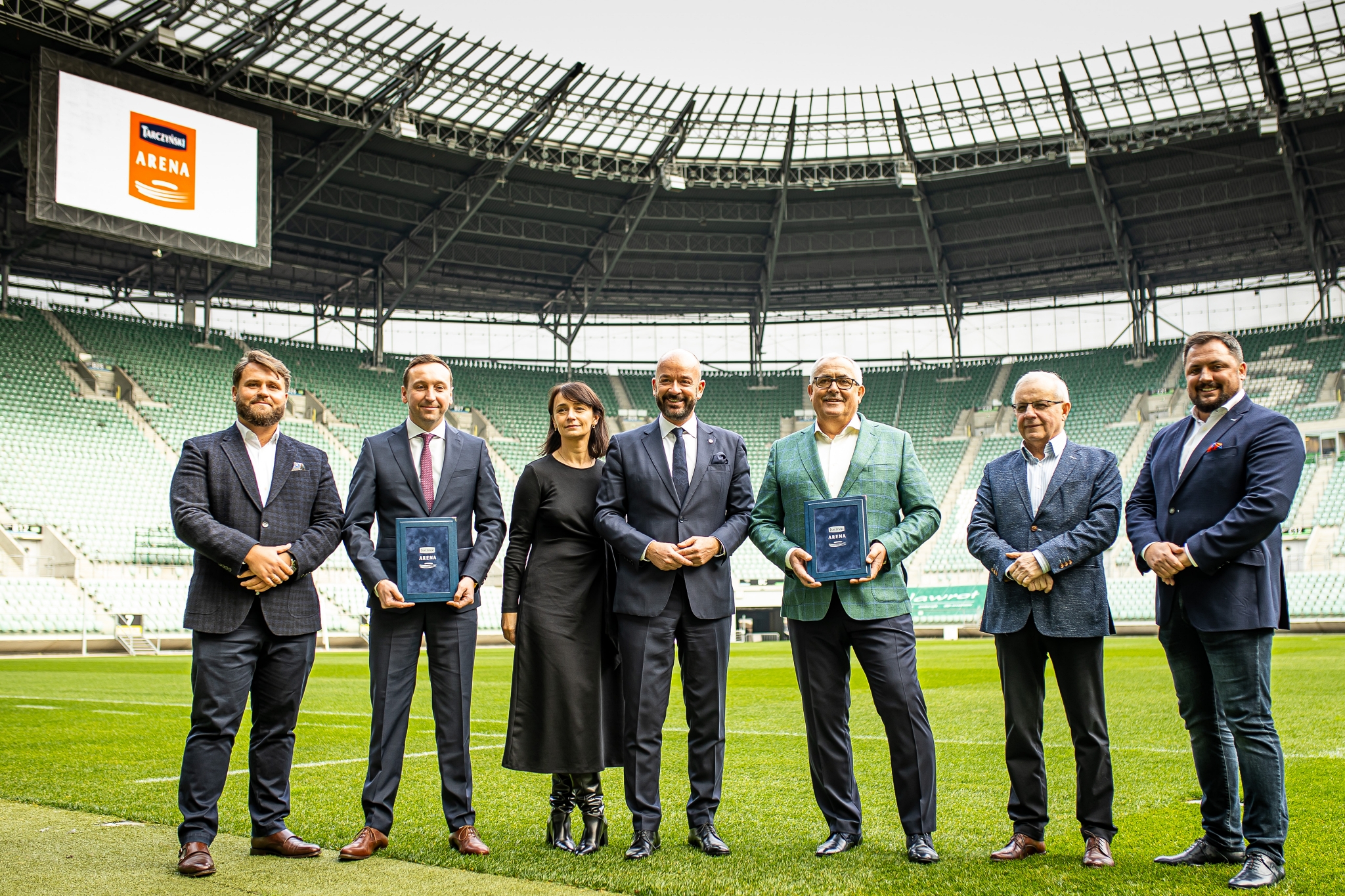 Tarczyński S.A. – one of the leaders in the food industry in Poland and brand No. 1 in the category of pre-packaged meats and plant-based meats – became the naming rights sponsor of Wrocław Stadium. The contract was signed for 6 years. During its term, the official name of the stadium will be Tarczyński Arena.

– I have no doubt that this is a great day for Wrocław and our flagship facility. Wrocław Stadium is gaining a naming rights sponsor and will now function as Tarczyński Arena – says Jacek Sutryk, mayor of Wrocław. – For me, it is extremely encouraging that we managed to gain such a valuable partner in a difficult time during the pandemic. And secondly – that this partner is a company having its origins here, associated with our region and providing many jobs. It is a local company, but with a global reach. I would like to thank the Tarczyński family for their fruitful discussions and I am convinced that the benefit will be mutual.

– Sport has always been important in our family. My dad played football, my mum was an educated physical education teacher, and my brother and I practised sports from an early age. This is why our family business has been involved in activities promoting sport and physical activity for many years. In our private lives, we are also big sports fans and whenever we go to the United States for business or pleasure, we eagerly go to stadiums to watch live sports events. It was there that we saw for the first time that each facility has its naming rights sponsor and our dream was to be able to have the Tarczyński brand name in the stadium’s name in the future. We are glad that this became possible in Wrocław, which is so close to our hearts – says Dawid Tarczyński, Member of the Management Board and Development Director at Tarczyński.

An international brand with local roots

The naming rights sponsor of the stadium is one of the most popular companies in the food industry in Poland. Its products are available in nearly 30 countries around the world on 3 continents, including Germany, the USA and Great Britain.

– This year we’re celebrating the 30th anniversary of our company, which thanks to the hard work of our parents, whom we represent today, has become a global brand, known in nearly 30 countries around the world. Sport, which has always been close to our hearts, has taught us to pursue goals and continuous self-development. The naming rights sponsorship of the Wrocław stadium is the crowning achievement of our activity and commitment to supporting sport and local community. At the same time, it is an important marketing activity for our company. We want to be there for people and be close to people and – following our mission – inspire them to eat wisely in order to change their lives for the better. We hope that such a visible display of our brand will help to reach an even wider audience, who are our current or potential customers – says Tomasz Tarczyński, Member of the Management Board and Marketing and Export Director of Tarczyński S.A.

New name and branding of the stadium

– The signing of this contract brings the stadium into a new financial reality and provides it with significant benefits over the long term. I am convinced that this is also an important moment in terms of company image, because the facility acquires a naming rights sponsor after 10 years of operation. I would like to thank Mr. Jacek Tarczyński for his trust. I am convinced that the events organized at Tarczyński Arena will contribute to even greater recognition of the company he manages – says Marcin Przychodny, President of the Management Board of the Wrocław Stadium.

The new logotype of the facility is a combination of the existing logotype of Wrocław Stadium and the Tarczyński brand. When creating it, the commonly recognizable colors of the sponsor were taken into account.

A new logotype of Tarczyński Arena will be placed on the façade of the facility. The interior of the stadium and the stand will remain unchanged. The illuminated membrane will retain its character and will continue to shine in many colors depending on the events taking place in the stadium.

– Acquiring a naming rights sponsor in such difficult times is an undoubted success. The last two years have taken a heavy toll on our industry, so I would like to thank the entire team of Wrocław Stadium, who worked hard to ensure that the Stadium not only found its’ new ways around the new reality, but also made a big step forward. I would like to thank our partners from the Tarczyński company for their trust and I am looking forward to our cooperation – says Marta Urbanek, vice president of the management board of Wrocław Stadium.

In addition to the rights to the name and branding, the new sponsor also gained the opportunity to organize its own sports and entertainment events on the premises of the facility. One of the naming rights sponsor’s offices will be located at the stadium. The catering establishments will offer kabanos sausages, cold cuts and protein snacks produced by the Tarczyński company. You will also be able to try hot dogs with sausages of this brand.